Film director JulieHera DeStefano traveled to Afghanistan in 2011 to learn more about the experiences of women serving in the combat zone. As she gathered stories, one driving question led to the feature-length documentary Journey to Normal: Women of War Come Home – What happens when they come home?

The Peters Township Public Library will offer a screening of the documentary on Sunday, September 23 from 1:30 to 3:30 p.m. followed by a discussion led by DeStefano. The Peters Township Library Foundation is partnering with the library to offer this program. Register online to attend or call 724.941.9430 #1.

Women now make up 15% of our military force, and roughly 300,000 women are combat veterans from our most recent conflicts. In order to learn their experience beyond the “happy homecoming”, this documentary tells the stories of eight women over a three-year period.  The film follows these veterans through reintegration after combat deployment, through marriages and divorce, through the birth of children, and the search for new jobs. From their collective stories, we can learn about changes in our society and the broader implications for women and men, for veterans and civilians. 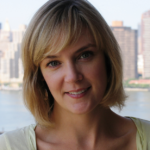 Producer/Director JulieHera DeStefano graduated from Carnegie Mellon University (BFA, School of Drama), and has built a career both in front of and behind the camera. She served as the Managing Director and Producer of an award-winning off-Broadway theater company and as the Business Manager of a New York-based film and photography studio. Her acting credits include the films The Preacher’s Wife and The First Wives Club.

The popular on-demand film streaming service Kanopy is now available for free by registered users of the Peters Township Public Library. PTPL cardholders can access Kanopy and sign up to start streaming films on instantly by visiting https://ptlibrary.kanopy.com/. Films can be streamed from any computer, television, mobile device or platform by downloading the Kanopy app for iOS, Android, AppleTV, Chromecast or Roku. 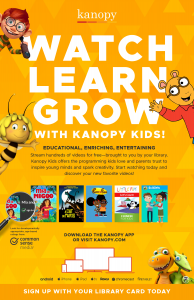 Our subscription includes Kanopy Kids: thoughtful entertainment for children aged preschool and up. Kanopy Kids categories include TV Series, Learning Languages, Animated Storybooks, Anime Favorites, Classic Films and Movies for the Whole Family. Key titles include Arthur, Babar, Franklin & Friends, Maya The Bee, Wild Kratts, Between the Lions, Little Pim, and Nigerian-animated Bino & Fino. The collection also highlights Classic Films from Charlie Chaplin and Buster Keaton and Oscar® nominated titles including A Cat in Paris and The Secret of Kells, plus family-friendly documentaries, Girls Rock, and The Endless Summer. In order to help parents decide which videos are best for their children, Kanopy has partnered with Common Sense Media™ to provide developmentally appropriate age ratings on Kanopy Kids. Parents can also choose to implement parental controls for additional security.

With the motto of “thoughtful entertainment,” Kanopy provides Peters Township Public Library cardholders with access to films of unique social and cultural value; films that are often difficult or impossible to access elsewhere, and programming that features diversity, with a wide array of foreign language films and films on race, and current affairs.

The Kanopy collection includes indie hits like Hunt For the Wilderpeople and 2 Days in Paris, classic masterpieces like Aguirre, the Wrath of God and Seven Samurai, and award-winning documentaries like the 2017 Oscar®-nominated I Am Not Your Negro and Sundance Film Festival winner Mother of George.

Kanopy was founded in 2008 by CEO Olivia Humphrey as an educational tool for colleges and universities. More than 5 million Kanopy users stream the most acclaimed movies and documentaries from award-winning filmmakers and experience the best in independent, classic film, and world cinema.

This week’s big event is a Sports and Fitness Magic Show with Gregory Bracco on Saturday, July 16 from 2-3 pm. The whole family is invited!
Register online or call 724.941.9430 to let us know you will be coming!

Get a glimpse of what we have in store for you this week! For more details about the programs listed in this slide show, visit the Events Calendar page on this web site.